A Family Adventure in Medical Tourism It is hard to recommend taking a 19-hour flight with a toddler to get a root canal with a straight face. But after going on just such a mission in December, I will aim to get all future dental work done in Thailand.

Our 16-day trip began as a search for savings. Not for a budget vacation, but for affordable dentistry. Between my husband, Tim, and I, both freelancers, we needed $5,000 to $6,000 in routine, but nonetheless prohibitively costly, dental care. Frustrated at our situation, I tossed out a tongue-in-cheek Facebook post announcing my intention to become a “dental tourist.” I was half joking, but within minutes, recommendations for hospitals, clinics and hotels in Bangkok were rolling in.

Even within my immediate circle of friends and family, a surprising number of people had traveled abroad to get fillings and crowns, whitening and implants. With good reason, it turns out. If the work needed is extensive enough, it is possible to save money even after accounting for the cost of travel. In other cases, the savings are just enough to pay for a tropical vacation, which is compelling when you are staring down the barrel of subfreezing temperatures. 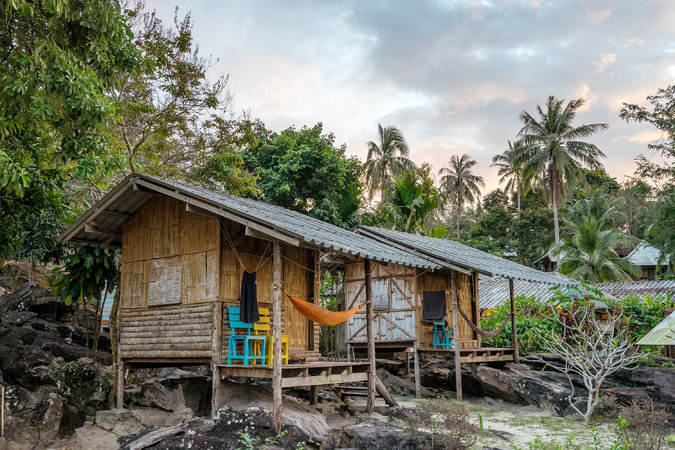 Egged on, I booked flights and made appointments. The plan was to spend a few days in Bangkok getting our initial round of work done, then take a weeklong side trip to Ko Kut, which was relatively near and said to be among the most beautiful of the country’s hundreds of islands, where we would swing in hammocks, drink fresh coconut water, splash in the Gulf of Thailand and recover from our root canals.

Between the long flight, jet lag and dental work, the first few days of our trip were grueling. I scheduled our itinerary with an irresistible, but perhaps ill-advised, 24-hour layover in Seoul, South Korea, which I had long wanted to visit. What I hadn’t realized is that it would be 23 degrees and snowing when we landed — 70 degrees colder than Bangkok. Our first flight, an intimidating 13 hours, was surprisingly smooth thanks to an airline-provided baby bassinet that snapped into the bulkheads. I had requested this at the urging of a friend. Also, the Korean Air flight attendants, immaculately dressed in powder blue satin shirts, tailored pencil skirts and coifed updos, were there to scoop up Roxie from our arms at the first sign of fussiness.

By the next day, however, we had exhausted our luck. Halfway through the seven-hour flight to Thailand, Roxie got sick. All over Tim. All over me. All over the airplane seats. And all over herself.

Tim and I spent our first full day in Thailand taking turns with Roxie, who rebounded immediately from her mystery ailment, while the other underwent the dentist’s drill. Having been warned that Bangkok was hot, loud, polluted and crowded, our plan was to spend as little time there as possible. Normally, the warnings would have only intrigued me. But exploring a fascinating, but exhausting metropolis while recovering from a root canal and caring for a jet-lagged toddler is no one’s idea of a good time.

After three days in the capital, a fascinating, modern city that I want to revisit, the eastern city of Trat was practically bucolic. Artist’s Place, our guesthouse ($20 a night) was on a narrow alley where trays of coconut meat were laid to dry on the street. The courtyard garden had statues of Buddha and sacred elephants that were overgrown with bamboo and bougainvillea.

We arrived in the late afternoon after a four-and-a-half-hour drive. Concerned about the safety of Thai buses, we paid $120 for a transfer — a private, car-seat-equipped sedan and driver. After taking the comfortable, air-conditioned bus on our return ($7.50 each), I probably wouldn’t bother with the private car again.

Like most of Trat’s guesthouses, Artist’s Place sold ferry tickets to the nearby islands, which included transportation to a nearby pier. But when our taxi arrived, it wasn’t a car, which I was already conflicted about taking — even a short distance — without a car seat. Instead, it was a songtaew, a pickup truck with a metal cage around the cab and two benches lining the bed.

After erring so strongly on the side of caution the day before, I found myself standing on the street in Trat trying to decide whether to ride with Roxie in a pickup’s open back. I felt like an idiot. But having traveled 8,000 miles, plus a day’s drive, to this town near the Cambodian border, I also knew that we had already committed. So, I climbed in, strapped Roxie to my chest in her carrier and held on.

A 45-minute boat ride later, Ko Kut rose from the Gulf of Thailand, a green hump ringed by an undeveloped beach and statuesque boulders that looked as if they had been designed for diving into the sea. The boat deposited us at the mouth of a river lined with decaying wooden fishing boats strung with drying clothes. There, we met another songtaew, one of the few full-sized vehicles on an island where most people get around by motorbike.

On the recommendation of the indispensable Southeast Asia travel guide, Travelfish, I had made a reservation at Ngamkho Resort. A dozen or so bare-boned cabanas built of rough-hewed logs, bamboo mat-lined walls and a corrugated plastic roof, the family-run Ngamkho isn’t a resort in the typical sense. Six or so feet off the ground and barely big enough for a full-size bed, our hut had a bathroom but no air conditioning or hot water. During our five-night stay, I missed neither. The front porch had a hammock overlooking a grassy lawn, palm trees and the water. At dusk, the cicada buzz sounded like electricity pulsing through the palms.

Despite flowing pants and reading glasses, Uncle Joe, the patriarch of the Ngamkho family, could be a gruff character, ruling the resort with a charming but semi-authoritarian air. But it soon became clear that Uncle Joe was a softy. While he barked at customers for failing to remove their shoes, as is Thai custom, he treated his beloved dogs — six roamed the Ngamkho grounds — to massages. Roxie, who was 17 months old, shared Uncle Joe’s love of dogs; she became an honorary member of the family during our short stay.

After two days of happily doing almost nothing, we arranged a songtaew to drive us to a village across the island. The previous night, a French climbing instructor had raved about a multicourse meal he had had there. While I had been nervous about taking pickup taxis in Trat, Ko Kut was largely carless and its narrow, hilly roads were driven at what seemed a mule’s pace.

As the songtaew crawled up the steep incline, the ride felt like being in aging wooden roller coaster. It creaked and squeaked as it climbed, rattling as it slid back to sea level. We passed roadside restaurants and signs pointing to bays, beaches and resorts before descending to Ao Yai, a fishing community built on stilts over the water. We got lost among the boardwalks before ending up at Sea the Sun, where Roxie helped as we pointed to this silver-skinned fish or that oversized shrimp, which were then netted from squat tanks. Twenty minutes later, beautifully prepared platters of whole fish and shell-on crustaceans arrived dressed in purple flowers. Among the great meals of my life, this one cost just over $20, including large, cold bottles of watery Singha beer.

Rarely have I felt as conflicted about leaving a place as I did in Ko Kut. I would have happily spent the remaining weeks of 2016 at Ngamkho eating banana roti, getting daily massages ($11) and teaching Roxie to swim. But our return trip was made relatively painless with a Boonsiri catamaran-bus transfer package ($25 each), which had us back in Bangkok in six hours.

After two more days of dental work, Tim and I were finally done. My jaw was still numb, but it was our last night in Thailand and I couldn’t resist one more visit to the glowing tents and converted shipping containers of the night market, where vendors sold high-waist jean shorts and trendy tote bags and a dozen or so bars competed for musical dominance. We went stall to stall, compiling a dinner of tender baby octopus, papaya salad, mango with coconut sticky rice, oyster mushroom tempura and salmon sashimi with a spicy chile sauce.

At the rooftop patio of one of the nearby bars, we unpacked our spread ($10). But as I was opening the plastic baggy of chile sauce, a hole opened in the bottom and the fiery red and green liquid shot directly into Roxie’s face. From shock or pain, she immediately began screaming. Slices of pepper ran down her face and clumped in her blond curls. She clawed at her face, smearing sauce into her eyes. Tim and I yanked off her dress, frantically bathing her hands and face with wipes.

Having heard the commotion, a waitress arrived with a pitcher of water. We threw Roxie’s head back, drenching both her and me. Then, without saying a word, the server whisked Roxie, dripping, red-faced and wearing only a diaper, downstairs. She was immediately surrounded by five women who went to work as if this happens all the time, rubbing her in what looked like lotion. Did they have some secret miracle ointment? Soothed, Roxie was returned, a couple shades paler, and we had our answer. “Only in Thailand,” Tim said, “would a bar be stocked with baby powder.”

Read more: “Five Ways to be a Savvy Medical Tourist and Enjoy a Vacation”

A version of this article appears in print on March 12, 2017, on Page TR1 of the New York edition with the headline: Searching for Adventure, and Dentistry. Order Reprints| Today’s Paper|Subscribe